What if the Moon fell?

I was wondering the other day how it would be if the Moon was knocked out of orbit somehow and began to get closer and closer to Earth. I decided to write a short story about it - a very short story. 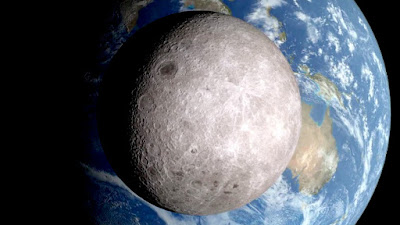 And here it is; my epic tale of the Moon approaching our planet, told in about 350 words:


It's now eight years since the object smashed into the moon, a glancing blow that hit the far side, gouging out a five hundred mile wide scar. It was the most spectacular event those of us watching had ever seen, and over the following months a ring of debris coalesced around the Earth, creating a bright misty arc from horizon to horizon. It was, and still is, quite beautiful.

But the moon was deeply wounded; it was no longer Earth's stable companion. Slowed by the force of the impact, the moon had begun to spiral towards our planet.

Scientists and governments had known about that long before we did, of course. And they knew that nothing could be done about it. The news finally broke just a day after the centenary celebrations of the first moon walk.

Society started to break down. There was panic, looting, and stock markets soon crashed completely. Pointless wars broke out. As the moon grew ever larger in the sky the tides became more extreme, eventually wiping out low-lying cities and farmland, and driving survivors onto higher ground. Most of us left in the USA are now here on the plains of Colorado, a mile above sea level.

And so the final day has come. Within the hour the moon will reach the Earth. It is filling almost the whole sky now. The sun, on its way down behind the peaks of the Rocky Mountains, is casting long shadows across the hills and craters of the vast landscape moving above me. Strangely what I feel is not fear as I watch the immensity of the moon above, it is awe; complete and almost overwhelming awe.

All around me the camp fires flicker and shimmer, painting amber the thousands of faces that are gazing up. Only the youngest of the children seem oblivious to what is happening as they dance and play to the rhythm of the flames.

The peaks on the moon are starting to glow now. There are fluffy streaks, like thousands of contrails, being etched across the sky.

It's all happening in perfect silence.