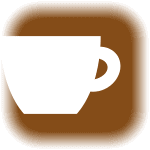 My short story, 'A Proper English Tea', introduces a mysterious, and quite disturbing, character. The story starts just after she has appeared in a tea shop when she introduces herself as Lansa.  She is not there to buy tea.  She is looking for something she calls 'The vapour'.

So who, or what, is Lansa?  Her appearance is described as:


Her long straight black hair clung strangely to her pale head and neck, merging invisibly with her black cape.

Her form is that of a young woman, but whether she is one or not is not certain.  She could be a manifestation of something else; something attempting to appear as a human female.  If so, then it is an attempt that is only partially successful.  Her deathly appearance and inhuman manner, and the effect she seems to have on her surroundings (the sudden onset of rain and the lack of people and cars outside) does nothing other than spook the tea shop's owner, Ella.

My view is that Lansa is a kind of 'moment of mortality' ghost; a second physical manifestation of someone attempting to warn of an impending life-threatening event.  It is likely that Ella is in mortal danger. But it seems that Lansa fails to get the warning across.  What that danger is is not made clear, but the clue is perhaps in what she says she's looking for: 'the vapour'.